At last, a program that guarantees you ....
SERIOUS RESULTS, SERIOUSLY FAST!

A number of the Original Bootcamp recruits explained that they had lost up to 5kgs of fat in the first two weeks!


Since 1991, Original Bootcamp has been willing to put its money where its mouth is by offering a full Money Back Guarantee* if you do not see serious results in as little as two weeks.

How can we be this confident? Because we have spent over 16 years developing our industry leading, results-orientated conditioning system, and have witnessed the shear elation experienced by thousands of our Recruits when they see just how quickly they are moving towards their objectives.


The original, and arguably the best boot camp program in Australia is run by a man known simply as CHIEF.


Universally recognised as the pioneer of boot camp fitness training here in the Southern Hemisphere, Chief J. Brabon has become one of Australias best known, and most influential fitness personalities.

Despite the responsibilities of his role as Global Master Trainer for Original Bootcamps parent company the Grunt Athletic Group, Chief (Along with Original Bootcamp Australias Director of Operations, Emily Hames, and the rest of their elite Instructor Team) still finds time to personally put close to 200 boot camp Recruits through their paces each and every week on both Coogee Beach, and in the Sydney CBD.

This commitment to remaining hands-on has allowed Chief and his highly experienced team of Master Trainers to continually evolve Original Bootcamps programs to not only meet the individual needs of our Recruits, but to also keep the programming fresh and challenging for all those die-hard boot campers who keep coming back month after month, year in and year out.


The real McCoy and not just another circuit or running class with a little camouflage thrown in for effect.


Dont be fooled, all so-called boot camps are most definitely not the same.

Unlike many programs that have recently jumped on the boot camp bandwagon, the Original Bootcamp is a true military inspired, outdoor group personal training program, that uses discipline as its main form of motivation. It has been scientifically designed to achieve serious results, seriously fast, no matter what your current fitness level, in a positive and social environment.

Whether you are an elite athlete with years of training experience, or a fitness first-timer who doesnt know the difference between a pull-up and a push-up, the Original Bootcamp has a program to suit your ability and your goals.


The best thing to get couch potatoes up off their bums is a little of Chiefs military style discipline. Trust me, literally hundreds of them are willing to pay for the Results.


Trust us, discipline DOES NOT mean yelling, screaming, blowing whistles, or belittling someone. It simply means that, when one of your highly experienced, and qualified Instructors tells you YOU CAN, and WILL do more, you push aside all the excuses and doubt, that have previously kept you from achieving your goals and simply GET IT DONE!

Dont put it off any longer. Fill out the form above for a FREE TRAIL SESSION, and experience the program that started a Fitness Revolution.


Original Bootcamp offers a range of products including: 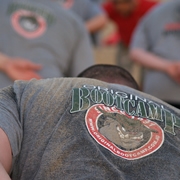 Enter your address below to get directions straight from your house to Original Bootcamp Sydney CBD!